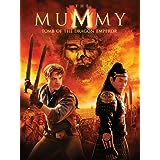 In this third of the series of Mummy movies, the O’Connells find themselves in China, battling the resurrected Han emperor, who wields magical powers, and his army of terra cotta warriors.

The Good: Pretty much everything about this film is good. Visually, it’s powerful, with great settings and excellent special effects—fully up to what you’d expect, given the previous films. The story itself is well written, with a clear arc of rising conflict, driven by the desires of opposing characters, and those characters are, themselves, well conceived. Everyone has a believable motivation, even the emperor’s modern toady. Further, the dialog is well-written, with some great little moments of true humor injected into otherwise tense scenes. (“The next time I say we’ve been in rougher spots before, this is the spot I mean!”) The acting is right on target from opening to ending, without a hitch. And the action itself is so smoothly integrated into the story that I forgot I was watching an action film.

The Bad: Not much to complain about. I might argue that the nod to Shangri-La was unnecessary, and not really in keeping with the water of life in the cavern on the way to that valley—but then, I’m a fan of the original Lost Horizon novel (and of the Lost Horizon film, although it wimps out on the ending a bit, reducing the effect.) A more significant complaint might be that Rachel Weisz did not reprise the role of Evelyn this time, and while Maria Bello did an excellent job, the casting change interfered with my initial enjoyment (especially given that the opening scenes deal so much with the domesticated days of the O’Connells attempting retirement). Imagine if someone other than Brendan Fraser were cast as Rick, and you’ll know what I mean. And finally, there is a plane landing that stretches the limits of credulity a bit more than I’m comfortable with, but not enough to spoil the movie.

Final Thoughts: I’m surprised, genuinely surprised, that reviewers and viewers alike rated this film in the C range. It struck me as every bit as good as the original movie, considerably better than the second, and certainly worthy of my admiration. This one goes into my favorites list, to be watched again on DVD for certain!

At Last, the Handy Caddy!

The Only Path to Serenity

“Information is not knowledge. Knowledge is not wisdom. Wisdom is not truth. Truth is not beauty. Beauty is not love. Love is not music. Music is the best.”