A pulp-era poker-deck game of cooperation against alien attack, for 2-4 players. 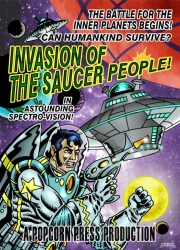 In space, everything’s in black and white.

It’s the year 2000, and mankind has spread from Earth, with thriving colonies on Mercury, Venus, and Mars. The Terran Service Rockets (TSR) carry passengers and cargo among these planets. Those same ships are commissioned as the space arm of the Guardian Defenders of Worlds (GDW) in case of external threat. So far, the only dangers have been from rogue asteroids. Today, however, long-range sensors detect a fleet of alien ships approaching, capturing or destroying everything in their path. Can you and your fellow captains defend the inner planets from the Invasion of the Saucer People!

What the Suits Mean

Jokers
Jokers represent a ship malfunction. They have a value of “zero.” In the System Attack, they count as the card to be added (or discarded, in the two-player game).

Victory Conditions
Play until the draw pile is depleted. Then note how many worlds were captured by the saucer people.

Bragging Rights
Each player discards any collected cards matching captured worlds. Any remaining cards represent that player’s fame on the world of that suit. The crew of that player’s ship gets free drinks on that world forever, and perhaps even a holiday or statue in their honor.

Optional Rule: Major Invasion
For a more challenging battle, play through the deck twice. Leave any cards marking captured worlds and bragging rights out of the deck the second time through (this may mean that the invasion ends before the players have depleted their second hand). This optional rule is highly recommended for the four-player game.

Optional Rule: Origins 2008 Deck
If you are playing with the deck designed for Origins 2008, which has an extra King—the Marcus King—that King is the Pirate Captain from Ceres in the asteroid belt.

SPOILER: Ithaqua vs. Anderson (and Cheat)

4 thoughts on “Invasion of the Saucer People! Game”