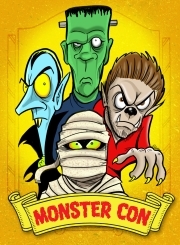 A poker-card game of monstrous competition for 2-4 players.

Desiré Delamort, star of this year’s blockbuster alien-invasion film, is guest of honor at MonsterCon*. What she doesn’t know is that she’s also the Vampire’s intended bride, the Mummy’s reincarnated love, the Werewolf’s destined mate, and the key to restoring the Zombie’s soul. Each of these creatures is stalking among the costumed attendees of MonsterCon in hopes of capturing her. Can they get the girl without giving themselves away and falling prey to an angry mob of horror fans? And in the end, who will she go home with?

Turn Sequence
Play proceeds by hands consisting of a series of “tricks.” Each hand begins when the deck is shuffled and dealt out. Each hand ends after the 12th card is played.

Monster Abilities
Each monster has one special ability that can be used once per hand.

To show that their ability has been used, players turn their King face down. (The Zombie is an exception.) At the beginning of each hand, all Kings are turned face up again and their power is restored.

Ending the Game
The game ends when one player accumulates 100 or more Mob Points. That monster is chased from MonsterCon by an angry mob. Any Stalker Points the player possessed are lost.

Winning the Game
The winner is the player with the most Stalker Points at the end of the game. That monster escapes with the girl during the chaos of the mob attack.

In the case of a tie between players with the highest Stalker Points, the girl escapes them while they fight a showdown battle, and the player with the next-highest total captures her instead.

If there is no monster remaining outside the showdown battle, the girl escapes with her sports-superstar boyfriend and all monsters lose.

Optional Rule: K8’s Vampire
If K8 is playing the Vampire, just before the player who won a trick collects those cards, the Vampire can choose a different player (even the Vampire) to receive it instead. The mesmeric gaze is broken if either of the players involved turns his or her currently face-up King face down. (If the Zombie is turned face down to counter the Vampire, the Zombie player loses two cards at random.)

Optional Rule: Origins 2008 Deck
If you are playing with the deck designed for Origins 2008, which has an extra King—the Marcus King—shuffle it in with the other Kings at the beginning of the game. It represents the Entity, which has the following special ability:

Five-Player Game: With the Origins Deck you can play a five-player game by using all five Kings. Deal nine cards to each player instead of 12 each turn, give the Zombie two extra, and set the remaining three cards aside, face down. The Mummy chooses one monster to be ignored when declaring “across” for the Whirlwind.

*The Comic Monstore in Salisbury, NC, holds an annual Comics & Toys MonsterCon, where you can find other people to play this game between a multitude of other interesting events!

A Question of Relevance, Part 2