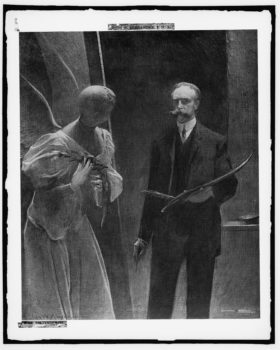 You don’t sit and wait for your muse to arrive on a whim. You coax your creative child mind out of hiding. You do it by talking about how much fun a project will be. And by telling it what a genius it is. How the world will be enriched by its art.

The “you” doing the coaxing is the other half of a writer’s brain. It’s the parent, the manager, and the critiquer. That side is rewarded by a sense of satisfaction with a job well done.

Sometimes the parent side has to discipline the child to keep going.

“Yes, I know this part is harder than the rest. But look at this wonderful part you already did! That wonderful part deserves a wonderful whole. You can do it. Nobody else can. Because you’re a genius!”

And sometimes the child side has to encourage the parent, who feels, “Why even bother. The world is already full of other people’s art. How can I expect mine to even get a glance? And ultimately what’s the point of doing anything in the shadow of Ozymandius?”

To which the child side says shyly, “But it’s fun to play.”

Without both, there’s no success. I’ve met people with utterly phenomenal talent who can’t pull themselves together enough to produce. And I’ve met people who can only critique other people’s work, because their child side is too beat down to risk disapproval.

Coax and polish. It’s how I edit other people. I measure myself with the same stick.

Because you know what? I’m a genius! (At least that’s what I have to keep telling myself.)

One thought on “The Mythical Muse”