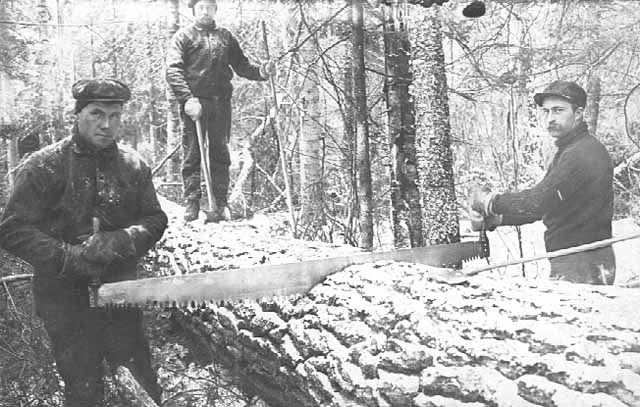 At 13 years of age my dad worked 10-12 hour days with his dad, wearing blisters on his hands hoeing tobacco fields and cutting trees with a two-man crosscut saw. Dad was kept out of school to work fields the first six weeks of classes and the last six weeks every year. He never had a chance to attend junior and senior years.

This was what it took to keep his younger brothers and sisters fed, clothed, and sheltered. And sometimes the food was only water biscuits and water gravy. Water carried by hand from a spring down the hill.

(Note: My relatives had owned two farms and a general store until the Great Depression.)

At 18, Dad left home and took a job in a canning factory. He and a few other fellows just as poor slept nights in a nearby bean field, with a canning knife always at hand to keep from being robbed. At 19 he landed a job at a General Electric plant, married my mother, and had his first son—me.

Dad paid rent for the house we lived in by working the owner’s fields each evening after factory hours. He bought a used car to get back and forth from the plant that winter. Turns out the dealer had packed sawdust in the oil pan to keep it from leaking, just long enough to sell it, and the car broke down, leaving Dad in a financial quagmire.

The dealer tried to garnishee my father’s wages; GE threatened to fire Dad if that happened. A local lawyer heard the situation and intervened so my mom and I wouldn’t end up homeless that winter. (He didn’t charge anything, just made my young father promise to never assume everyone’s word was their bond.)

GE was not a pleasant place to work back then. A worker could be fired without cause, and there were no safety laws on the books. Dad risked his job to help establish a labor union in the plant, the AFL-CIO.

My brothers and I never had to worry about food or clothes, or even schooling. Dad’s work ethic saw to that. But we also learned something of that labor ourselves, hoeing vegetable gardens, snapping beans and shucking corn for canning until past midnight many school nights.

I kept exemplary grades from elementary school through high school, partly through innate curiosity about the world, partly because study was just another type of labor, and work was a fact of life. But college was a foreign concept to people of our working-class roots. As inconceivable as traveling to a foreign country. (Except perhaps in the Armed Forces; my family has always included soldiers and sailors.)

So I married young (to a tenant farmer’s daughter) and went to work in the same factory as my dad, working alongside the guys who had fought beside him for the union representation I now enjoyed. I spent 8 1/2 years there, proud to be a laborer, but wishing for more education.

My wife encouraged me to join the National Guard, and I went in as a medic. Spent a year in nursing school, became an LPN, and started college classes for a Physician’s Assistant license. I worked part-time jobs between classes, and Jenny managed our household of five while also caring for state-sponsored handicapped kids. It was a “tough row to hoe,” as Dad would say. Sometimes we resorted to food stamps.

In college I fell in love with writing and fixed my sights on a publishing career. Contract work led to a salaried position at Game Designers Workshop, which led in turn to TSR, and even a bit of European travel. With TSR’s demise I settled for writing in educational publishing—though I continued freelance game work on the side. Now in retirement I still do for the sheer love of it.

I never made a fortune, sometimes barely kept the family housed and fed. But I learned to never stop learning, taught my daughters the same, and encouraged them to pursue their own dreams. One owns a farm (where I now live); one lives in Belgium (speaks four languages); one has started a film career as a sound engineer; and one helps care for her aging parents (and my self-publishing).

Why tell you all this? Because it explains why I identify with blue-collar labor and migrant workers, social workers and teachers, nurses and wait staff, and rank-and-file Armed Forces members. Education has only made me more aware of how they’ve always been taken advantage of. How they still are. How little difference there is between inherited wealth and inherited royalty.

Read Jack London’s The People of the Abyss. If you never read anything else in your life, read that. And then Niall Ferguson’s The Ascent of Money.

People who make things make the world. If they get rich doing so, wonderful!

But people who make only money do so through the sweat and suffering of others. They wield the most political power while contributing the least to human civilization. They make the world their casino. And the house always wins.

These are my considered beliefs. This is who I am.

Look What Kate Made Me!

“Advice is what we ask for when we already know the answer but wish we didn’t.”