It’s been four-and-a-half years now that I’ve been playing the Elder Sign: Omens app. That’s fairly astounding. I’m not apt to play anything over and over and over—this and the Vampire: Bloodlines PC game are notable exceptions.

What gives Elder Sign: Omens its longevity on my phone and tablet is partly its portability: I can play a turn or three while riding in the car, for example. But the main reason is undoubtedly the tens of thousands of permutations for building a four-person team from a pool of 32 characters.

In previous posts I’ve discussed strategies for using different teams against the seven different “ancient ones.” And even a few instances of playing a single character instead of a team. This year I’ve taken a slightly different tack, assembling teams by theme. Allow me to introduce you to the four so far—and one in the wings. 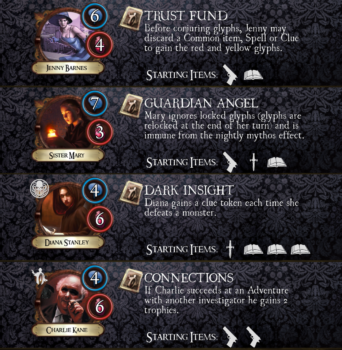 This team was assembled on a whim, based on the fact that there’s a Charlie among the 32 characters, and that the game has so many female characters with kick-ass special abilities. For this team I chose Jenny Barnes, Amanda Sharpe, Diana Stanley, and Charlie Kane—in that line-up order.

Jenny and Amanda have long been two of my favorites: Jenny almost always has the bonus red and yellow dice at hand, and Amanda isn’t limited to one task per roll—if she’s got the results to solve several, she can. I added Diana because she’s a monster hunter, sort of a combat specialist, which seemed legit for the theme. As for Charlie, I’ve always thought lame his special ability to gain extra trophies by helping an investigator who failed a task; I plan for characters to succeed. But his name’s Charlie, so there you go.

It’s a very good group against pretty much any of the ancient ones. But I’ve played those three ladies in so many other teams that “Charlie’s Angels” didn’t hold many surprises. What did surprise me was Charlie’s effectiveness—which brings me to team two …

“I Got Your Back” 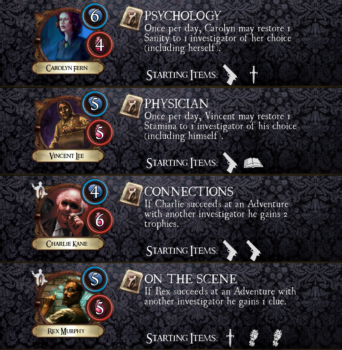 In this case I chose four investigators I’ve never really liked. But it occurred to me that they each have a “help someone out” ability, so why not band them together? Dr. Carolyn Fern restores sanity and Dr. Vincent Lee restores stamina; Charlie Kane and Rex Murphy chip in similarly on a failed task, but while Charlie gets extra trophies, Rex gets an extra clue.

Of the many teams I’ve assembled, “I Got Your Back” is distinctly the most effective. (I suspect there’s a life lesson in that.) 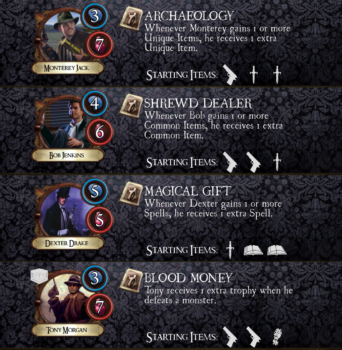 This team was built of investigators who got a little something extra each time they completed a chosen task. Monterey Jack gets a bonus unique item (red die) when landing a unique item. With Bob Jenkins it’s common items (yellow die), and with Dexter Drake it’s an extra spell. Joe Diamond gets to use each clue twice, which is more stinginess than actual greed, but he’s closer to the greed theme than the remaining 27 investigators.

The results from this team swung between extremes. On the one hand it meant that the investigators each quickly built a stockpile of items. The trouble was that it meant an overabundance of one particular type for each and a paucity of others. For example Joe often had more common items than he could ever actually use, but other items suffered. Even Joe tended to load up on clues more than anything else.

In situations where the game locked out one type of item, that investigator was screwed. (Especially painful in the Dark Pharaoh adventure, where nearly every day blocks out one thing or another.) I began to send the affected investigator to first aid, lost and found, or souvenir shop that turn. It proved to be a fairly effective strategy.

Joe’s clue ability proved to be the most effective of the four, followed closely by Dexter’s spells (a surprise), then Jack’s unique items. Bob’s common items definitely lagged behind the others, though the food and drink common items kept him in relatively good shape.

I’ve since replaced Joe with Tony Morgan, who gains an extra trophy when he kills a monster—which feels more suited to the theme. That extra trophy comes in handy for buying elder signs and equipment against the lower-powered ancient ones, and ally aid against the Dark Pharaoh.

Although not as effective as the “I Got Your Back” team, “Greed Is Good” turned out to be exciting. The team either scored wild success or crashed and burned. Mainly crash and burn against Ithaqua. That final ancient one was felled eventually, but it took more than half a dozen attempts. 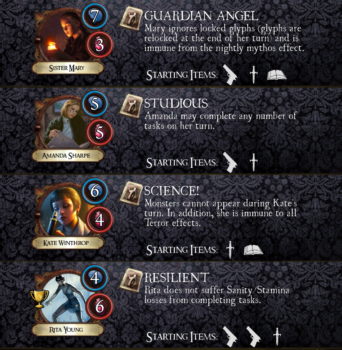 The theme with this team—which I’m currently playing—is immunity from one game effect or another. Sister Mary is immune to locked glyphs. Amanda Sharpe (mentioned earlier) is not limited to one task per roll. Kate Winthrop is immune to terror effects, and monsters cannot appear on her turn. Rita Young is immune to Sanity and Stamina losses from hazardous attacks.

This one has been tougher to succeed with, except (surprisingly) against the Dark Pharaoh! After losing several times to His Lordship, it occurred to me to try different allies. Instead of the Mender of Flesh (spend two trophies to heal two Sanity and Stamina) and the Guiding Spirit (spend two trophies to ignore daily restrictions on one type of equipment or another), I used the ally who adds a red die and the one who adds a yellow die (can’t recall their names). With that change I defeated Nyarlathotep prettily handily.

Ithaqua I’m still battling, having already failed a half-dozen times, many without even leaving the museum for Alaska! 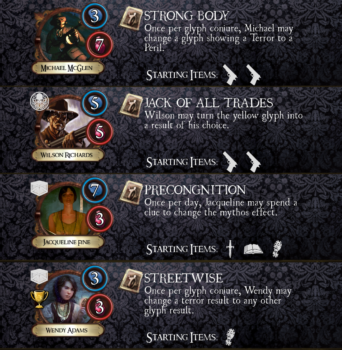 Next up will be a team of characters who can modify dice icons and midnight doom effects: Michael McGlen (changes a Terror to a Peril), Wilson Richards (changes the yellow die face to whatever he wants), Jacqueline Fine (changes the nightly mythos effect), and Wendy Adams (changes a terror to whatever she likes).

I’d love to try a monster-hunter team, but there are only two investigators with related abilities, and it’s a minor aspect of the game, meaning they’ll almost certainly fail again and again. But maybe with a couple of investigators whose illustrations include guns?

Any ideas you can think of?

Choose Your Own Adventure—Dinosaurus Rex

“Don’t be afraid of mistakes, there aren’t any.”