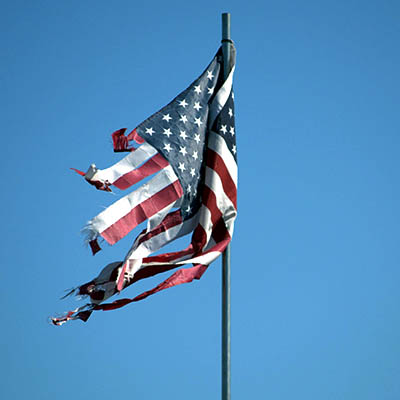 Whatever the outcome of this election, it says something about our nation that I’d hoped was not true.

I’d hoped the wreckage of this year would break the spell of belief in one man over all experts. I’d hoped the cult of personality was a small but loud minority. That the election is this close tells me our country is actually as divided and stupid as it appears.

Think about it: On the eve of America’s most important vote, the “Leader of the Free World” makes a Tweet that Twitter and Facebook have to flag as “False.” Fake Tweet. This is a defining event.

Regardless of the election outcome, I think the “Grand Experiment” is on its knees. Will it stand again? Who knows. Maybe its two-party backbone just can’t bear the weight. I don’t think we have the luxury of time. My last hope for humankind rests with the European Union.

In any case, this year has permanently changed some of my relationships, for good or ill. Some friends and family I’ve lost faith in and respect or time for. While some acquaintances have stepped forward with unexpected friendship and support. I hope the reverse is true. That some now recognize me as a clear enemy of their values and beliefs. And that some find in me an unexpected ally.

Love matters. Not the wishy-washy let’s all get along kind. The firm kind. The “I don’t hate you but won’t put up with your shit” to oppressors, and “I’ve got your back, now how can I help” to the oppressed.

I don’t know all the answers. But there’s an evident path. And clear roadblocks. Fuck complacency and ignorant resistance. Let’s go.

A Tale of Chromebook Disassembly

“There are some fine books and essays about that. Lewis Hyde has written about alcoholism and poets and the role that society gives its writers—encouraging them to die.”