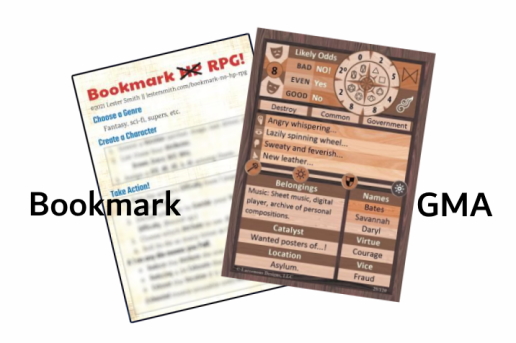 If you’ve never role-played with a GM oracle, you’re missing out on something. Nothing is quite like a good GM, of course, but neither is a human GM quite like a “solo oracle,” especially when you turn solo into group play.

The trick to oracle play is to ask questions you would of a GM, but mainly in yes/no form.

“Is there a back door to this basement?” Turn a card, “Yes,” or another card might say, “No, but.” Let’s go with the second. “Okay does ‘but’ mean there’s a window?” Turn a card, “Yes, AND.” I’m going to assume “AND” means the window is something I could use as a door, so it must be within reach, and it isn’t locked.

Here’s where the RPG rules kick in. I’ll use my favorite RPG’s Climbing skill to see if I can get up and through that window. Roll the dice, succeed, and now I’m out of the burning building.

But few oracles are just “yes/no.” Most have prompts to answer other questions you might ask a GM. “What do I hear through the door?” Guess I’d better use my rogue’s Listening skill. He succeeds! I turn a couple of cards, pair a couple of random words on them, and decide “faded” and “joyfully” mean some goblin guards are walking away, laughing.

When you’re playing like this in a group of friends, somebody else might have an even more exciting suggestion for what those words mean. The end result is something that feels very much like gaming with an extemporaneous GM. It isn’t open-ended chaos, though, because oracles tend to have mechanisms for generating scenes that follow an unfolding plot to a crescendo just like GM-led play.

Things have come a long way from that AD&D 2e appendix of dungeon mapping I used to use out of desperation when my friends were out of town and I was jonesing to give my wizard PC some play. Check FB for solo role-play groups and you’ll find a wide variety. Or check out professional voice actor Trevor Devall’s YouTube series “Me, Myself, and Die.”

Having played many, many oracles over the past couple of years, the one that edges out the rest for me is GameMaster’s Apprentice. There are simply so many prompts available to choose: from the usual yes/no, to verb/adjective/noun pairings, random character names and virtues/vices, item suggestions, a scatter diagram, sensory snippets like the scent of “hot, melted butter,” and much, much more.
I ain’t gonna lie, other oracles, especially Mythic and Cut Up Solo, have their own uniquenesses that make the choice difficult, but what tipped the scales for me was GMA cards’ random Difficulty number and their “dice wheel” of random dice results.

Pretty much all my solo role-play nowadays, and most of my group play, is with my own Bookmark No HP RPG. And that difficulty number and dice wheel mean I can play in a space too small to roll dice, with just a piece of note paper, or even a text app on my phone (while waiting in the car, or at the doctor’s office).

I like that pairing so much, in fact, that I asked Larcenous Designs, the GMA publisher, if we could offer the two as a bundle on DriveThruRPG. And one of the more awesome things about that it means the Bookmark No HP RPG can be more than just a PDF, it can be a physical playing card. DriveThru can’t print and ship less than a dozen cards at a time, which kept Bookmark from being a physical item. But ordered together as a card with GMA, it works.

To say I’m thrilled is an understatement. ? More news to come.