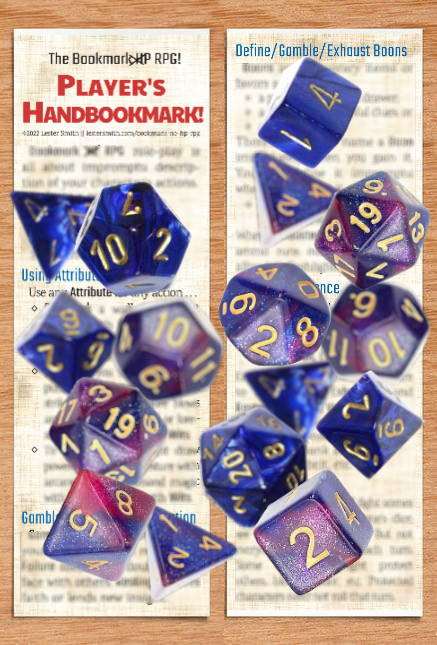 A new bookmark has joined the Bookmark RPG fold!

The Bookmark Player’s Handbookmark gives guidelines and examples for using Attributes and Boons, plus a Trait system for experience in campaign play.

(Yes, it turns out this tiny little RPG even supports campaign play. I’ve been part of a two-person cyberpunk campaign, using a solo oracle, since last September!)

It’s currently available in PDF form on the DriveThruRPG Lester Smith Games page. I’ve ordered physical bookmarks from VistaPrint for sale here on my website. In the works is a printed card version for DriveThruRPG.

BNHP reports from Gary Con have been enthusiastic, and I’m mulling ways to have the game demoed at other conventions. From my experience, convention evens leave players extremely enthusiastic about this and the D6xD6 RPG, largely because they can create a character from scratch within minutes and master the rules during play, pretty much within the first scene.

That, and walk away with their new character on a card or bookmark, instead of the usual pre-designed PC on an 8½ x 11" page.

If you’re interested in running either game at a convention or game store near you, message me here, on Facebook, or on Twitter, so we can work out some rewards. Thanks!

Vampires for the Holidays

“When the great Tao is forgotten, goodness and piety appear. … When the country falls into chaos, patriotism is born.”