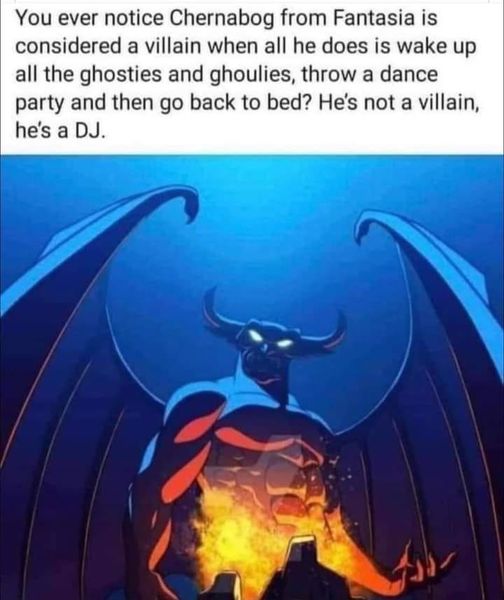 As a youth, watching this animation of “Night on Bald Mountain,” followed by “Ave Maria,” in the first Fantasia, is when I first realized that humans can easily conceive of hell, but not heaven.
Reading Inferno, followed by Purgaturio, and trying to wade through the blandness of Paradiso, clinched that thought.

William Blake’s words, “The reason Milton wrote in fetters when he wrote of Angels & God, and at liberty when of Devils & Hell, is because he was a true Poet and of the Devils party without knowing it,” is another way of stating the same.

(Blake illustrated Paradise Lost more often than any other artist, and was a renowned poet in his own right. Remember, “Tyger, Tyger, burning bright”?)

I’m convinced that we can more easily conceive of hell than of heaven because savagery is where we came from, “nature red in tooth and claw.” Heaven is a noble ideal we strive to achieve. But we’re having to invent it ourselves.

This is why I so often find myself disappointed with a priesthood that presents heaven as an established fact, with an established entryway. They’ve set up shop at a level spot and claim it’s the summit.

And why I so despise the Capitalist truism, “It’s a dog-eat-dog world.” Preying upon one another is a betrayal to the beauty and nobility we strive for, of which our race is so capable.

And the humor—like the joke in this graphic—which I’ve almost obscured with this little essay. 🙂

When Giving Up Isn’t

A Bit About Dobie

“I hold that a writer who does not passionately believe in the perfectibility of man has no dedication nor any membership in literature.”