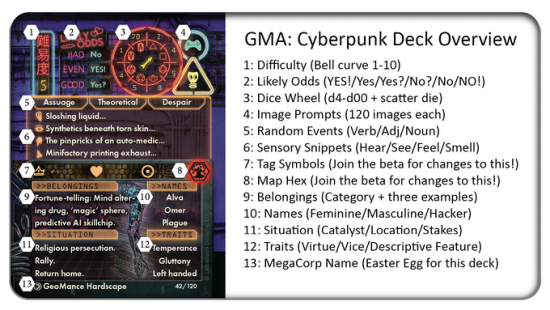 You may be aware of my love for Nathan Rockwood’s GameMaster’s Apprentice deck for GM-less role-play. Of all the oracle systems I’ve used, GMA is my hands-down favorite, with Cut-Up Solo an unusual second.

You can see in the image here all the information available on each randomly drawn GMA card, which makes it “one-stop shopping” for storytelling details.

Unrelatedly, my old college buddy Tim Ryan and I have been playing a cyberpunk role-playing campaign for nearly a year now, using the GMA core deck as game master, and my Bookmark HP RPG as the game rules. So when I discovered that Nathan was Kickstarting a brand-new themed GMA deck, for cyberpunk, I just had to back it! 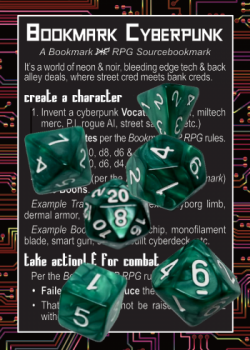 Serendipitously, I’d already begun working on a Bookmark Cyberpunk Sourcebookmark. So I asked Nathan about including that as an add-on to his Kickstarter, and he agreed, enthusiastically.

Check it out. There’s also an add-on bundle available of the Bookmark HP RPG card, the Player’s Handbookmark, and the Game Host’s Guidebookmark. (D&D fans should appreciate the nostalgic nod of those titles.)

Footnote: When I designed the D6xD6 RPG back in 2014, though I’d included rules for character growth through experience, I sort of assumed that wouldn’t hold up to long-term play, just mini campaigns of a half dozen sessions or so. But as an experiment a couple of years ago, I decided to see how far it could go, and after a two-year campaign, the experience system was still working smoothly!

Still, surely the tiny BNHP experience rules couldn’t support a campaign, right? But I figured that, silly as the idea sounded, it couldn’t hurt to give it a try. And as noted, a year into a cyberpunk campaign, character growth is still working! One more reason to be proud of this little RPG, designed on a whim one weekend, as an experiment in HP/XP-less role-play.

“It is impossible for a man to learn what he thinks he already knows.”