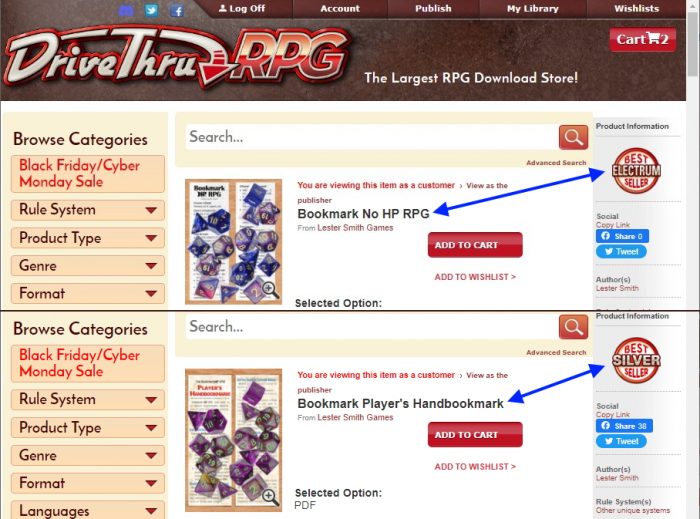 “The world is your bookmark,” Joel Brooks

I’ve no idea what Brooks meant by that statement, but it makes a decent lead-in for this post. And if you’ll allow me to paraphrase, “A bookmark can be a world.” At least in tabletop role-playing game terms.

About a year ago, on a whim, I did a weekend thought experiment in role-playing rules to track damage without the typical “Hit Points.” As of today, the Bookmark RPG core rules bookmark has reached Electrum Best Seller status on DriveThruRPG, and the Player’s Handbookmark is now a Silver Best Seller! Four other titles in the line are currently Copper Best Sellers (Bookmark Cyberpunk, Bookmark Supers!, Dracula’s Get, and the Game Host’s Guidebookmark), and several newer bookmark titles are well on their way.

Having worked full-time in a hobby dominated by Dungeons & Dragons, I realize that these bookmark sales are Lilliputian.

But if you browse the thousands of publishers on DriveThruRPG, with hundreds of thousands of products, and note that less than 14% reach Copper status, less than 15% more reach Silver, and barely 7% reach Electrum status, you’ll understand that for this retired, self-promoting, self publishing designer, doing everything alone, it is something of an accomplishment. Add in several other best-selling games outside the bookmark line, from Copper to Gold, with some very flattering reviews, and I still wake up each morning encouraged to create.

And you’ll understand just how much your moral support means to me.

So, thanks! I much appreciate it.

Now I gotta get back to work.

“Vision without execution is hallucination.”