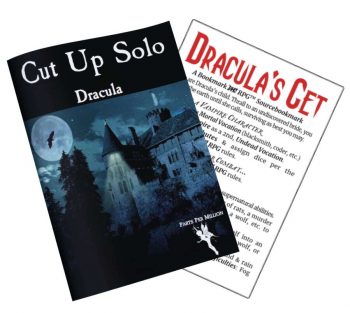 Today the Cut Up Solo Dracula/Dracula’s Get bundle went live (undead?) on DriveThruRPG.

So what is Cut Up Solo Dracula? Published by Parts Per Million, it’s Stoker’s novel cut up into 5-word snippets in a programmed spreadsheet. Every time you hit F9, the spreadsheet delivers a set of random snippets as a prompt to your imagination.

And what is Dracula’s Get? It’s a role-play distillation of Dracula’s actual abilities and weaknesses as depicted Stoker’s novel. A “sourcebookmark” for the Bookmark HP RPG. (My first sourcebookmark, in fact, so that I could port Petit Louis from D6xD6‘s “Fear the Light” setting. I love playing vampires.)

The word “solo” doesn’t quite do justice to PPM’s Cut Up Solo selections. “GM-less” is a more accurate (though less punchy) term, because this style of play is even richer with a group riffing off one another from the prompts!

As you can tell, I’m quite excited about this pairing. It’s a quick, flavorful way to hunt or play vampires with Stoker’s own words. Now at a discount!

These will be at Quincon…

“Poetry is an echo, asking a shadow to dance.”