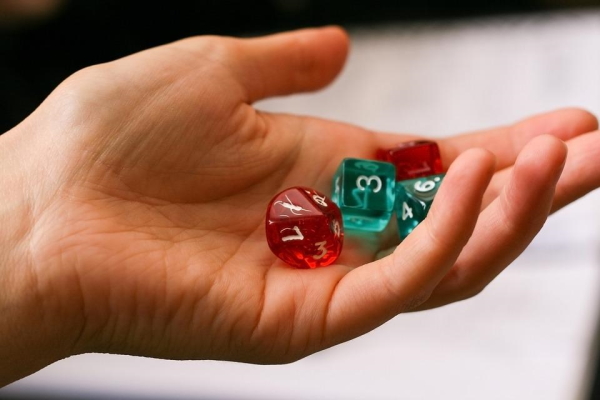 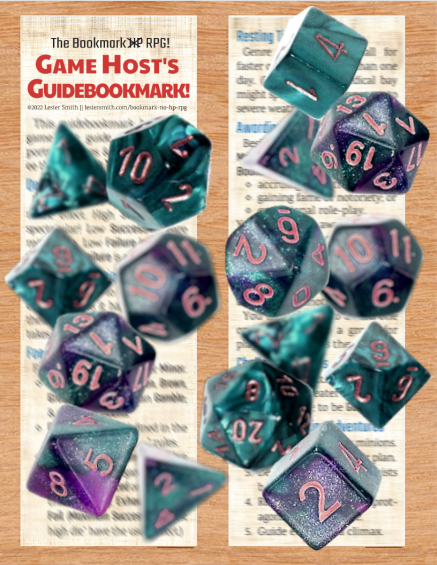 Let’s talk titles for a moment, because you may have noticed a pattern.

“How are you supposed to pronounce it? Why’s it have an HP in the title at all if you’re going to cross it out? Shouldn’t we name it something more exciting, like maybe Infinite Adventures, or Porta-Play, or Dragon’s Egg, or anything but Bookmark ‘No HP’ RPG?”

Why? Because it makes me laugh!

Which is why Dracula’s Get and Supers! are called “Sourcebookmarks.” And when people started asking for more player guidelines, I published a Player’s “Handbookmark,” and now a Game Host’s “Guidebookmark.” The words are so ridiculous that they make me laugh! And they’re an affectionate poke at the game that originated this hobby.

I only wish there were a word for “manual” that ends in “book,” so I could poke fun at Monster Manual. Looks like I’ll have to settle for Bookmark Bestiary. Fortunately concept itself is ridiculous enough to laugh at! Expect a slew of those, for different settings.

Oh, and about this Game Host’s Guidebookmark. It provides a rules twist for “mooks,” so your protagonists can handle attacks by mobs of your villain’s minions, plus guidelines for running scenes and awarding Boons, and the most concise “how to” I’ve ever seen for crafting adventures. This bookmark went through the same play-test and critique as the previous ones, so I think it’s safe to call it meaty.

By the way, my hypothetical Marketing Department would also have yelled at me about launching the line with Dracula’s Get, instead of fantasy, or sci-fi, or the Supers! Sourcebookmark. But I wanted to solo play Petit Louis, bastard son of Louis XIV, hanger-on at courts, part of Donald Trump’s retinue during the Presidency. And with the “mook” rule, he managed to survive an attack by ten human hunters, though just barely. He stumbled away, almost destroyed, and had to spend two weeks recovering in the tender care of the rock band he manages.

The one-week Kickstarter to fund illustration by Len Peralta raised nearly twice our goal, adding bonus illustrations and three bonus Heroes! Visit the Lester Smith Games page on DriveThruCards for this deck and others.

The free rules here work with a standard poker deck, so you can discover for yourself how the game plays.

These rules came to me in a dream one night. A bit of family playtesting, and here they are for you!

A fighter, a wizard, a priest, and a thief walk into a dungeon. The dragon says, “Sounds like a party!”

This game uses a standard poker deck to represent 2-4 fantasy heroes battling their way through an underground complex to find treasures and rescue captives. Who will emerge with the most loot and followers?

HOW TO WIN
At game’s end, the player with the most points of diamonds (treasure) and hearts (followers) wins! (Each card counts as its number value; Jacks count as 11 and Queens count as 12.)

Each player goes through these 7 steps on their turn.

Kings remain in front of players, identifying them for the duration of the game. Jokers are a special attack that take the place of a normal attack.

“ . . . On a huge hill, Cragged and steep, Truth stands, and he that will Reach her, about must and about must go, And what the hill's suddenness resists, win so.”