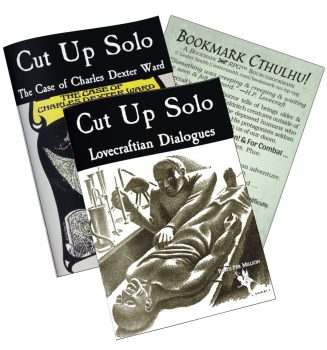 You may have seen my mention of the “Cut Up Solo” oracle series by Parts Per Million. Each oracle is an automated spreadsheet of 5-word snippets from a public domain novel (such as Dracula) or series (John Carter of Mars, for example). It outputs a group of four 5-word snippets with each press of F9, and you browse the list to see what role-play scene it suggests to you.

It’s a great spur not only for solo play, but also GM-less group play. My old high school buddy Jim Cotton and I have adventured together on Mars, for example, and had great times with it. That was even the genesis of the mass battle rules on the Game Host’s Guidebookmark of the Bookmark RPG.

So you can imagine how happy I am to announce that PPM and I have launched a Cut Up Solo Lovecraft/Bookmark Cthulhu bundle on DriveThruRPG!

(A Dracula bundle is not far behind.)

“You can’t fool me. There ain’t no sanity clause!” Chico Marx 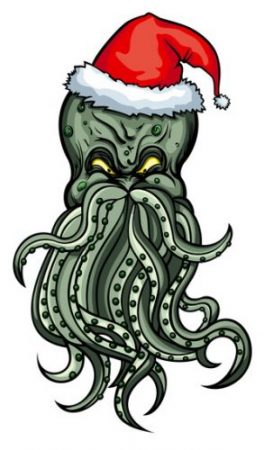 Bookmark Cthulhu is now live, just in time for the holidays! And in a break with RPG tradition, it has no sanity rules. What it does have is a system for steadily rising dread. That, and a way to rank Lovecraft’s classic monstrosities and create new ones of your own by using his most common adjectives.

Though madness is a common theme in Lovecraft’s tales, very few of his protagonists actually go mad. They suffer shock, they may feel themselves doomed, they may panic to the verge of madness, but they don’t end up in a sanitarium.

Instead, they suffer one of two maladies: loss, or dread.

In terms of loss, Lovecraft’s earliest tales take their protagonists to lands of dream, where some pass up a chance at happiness, and others find themselves unable to return. Many of his dream tales have no protagonist at all and simply relate a story of destruction. Dreamland tales are generally wistful narratives.

His later stories, however—what we think of as the Cthulhu mythos—occur in the waking world, where beings and forces more powerful and long-lived than humankind are discovered by a select few narrators. Narrators who tell of madmen and death, but who live to tell those tales. These are stories of existential dread.

The granddaddy of all Lovecraftian role-playing games is, of course, Call of Cthulhu. Its Sanity game mechanic is as legendary as it was innovative for the hobby. That steadily eroding Sanity attribute invokes a sense of peril that not infrequently results in death of players’ characters. The mechanic works so effectively, in fact, that most Lovecraftian RPGs since have mimicked it exactly.

Bookmark Cthulhu replaces “eroding Sanity” with a “growing Dread” in every adventure. (Sort of like mental “hit points” compared to eroding abilities.) This feels truer to Lovecraft, and better suits the unusual mechanics of the Bookmark RPG itself. Which gives the sourcebookmark a legitimacy beyond simply mimicking what’s been done in games before. 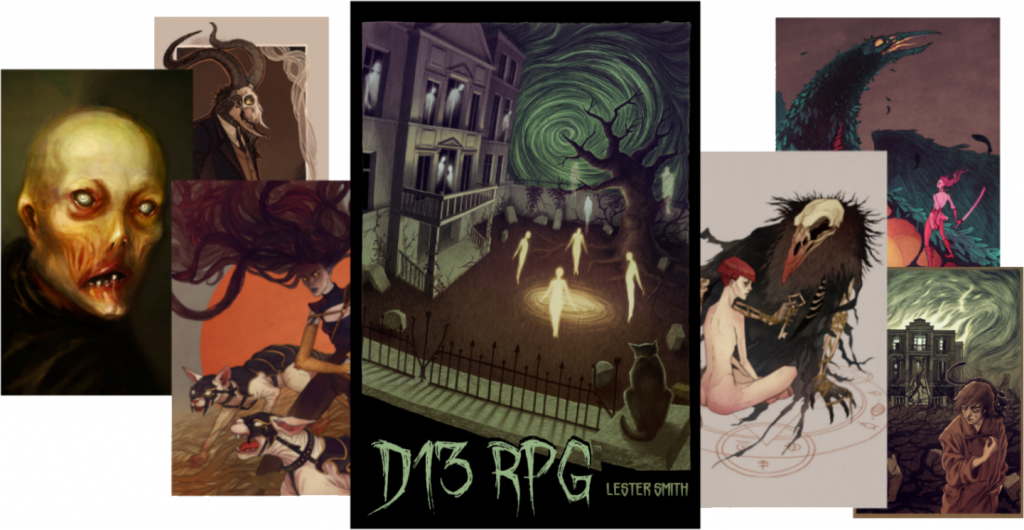 Conceptually it’s a game for running truly horrific adventures in campaigns across time and space. Characters face the real threat of death or madness in individual adventures—unaware that they are also threads of existence for supernatural beings battling a greater darkness.

Mechanically it’s an easy attribute-and-skill based system—4 attributes, any sort of skill. Actions use 1d4+1d10 (read 0-9) for a number range of 1-13, with beneficial doubles at the low end. For adventures involving psychic abilities, a tarot deck (or a poker deck) depicts the uncertainty and danger of those powers. For combat actions and turn sequence, a Ouija board can be used.

When I designed the Dark Conspiracy RPG in 1991, I envisioned a world into which any sort of horror tale could be adapted. But that setting’s framework also constrained the time, place, and even themes of those adventures. I’ve long wanted to do something more far-reaching.

Also, most horror RPGs either dial back the danger to let PCs survive from one adventure to the next, or make them part of a secret society, or abandon altogether the idea of campaigning so as to convey true horror.

The D13 RPG is a solution to all those problems. It lets GMs run truly horrific adventures that may maim, madden, or kill PCs—without killing the campaign.

Who Is the Artist?

Lenka Šimečková is an amazing young illustrator of the dark and bizarre, from the Czech Republic. I first became aware of her work while designing the D6xD6 RPG in 2014. She provided two character illos for that book, and I knew she’d be the perfect illustrator for D13 RPG.

You can learn more about the structure and mechanics in this #rpgnet Q&A transcript.

“All my best thoughts were stolen by the ancients.”