Cleaning up some old, unpublished posts at lestersmith.com, I came across this.

Whether you were a Battlestar Galactica fan or not, this “Worst Product Placement Ever” clip is worth watching to the very end. 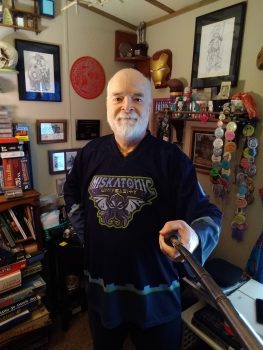 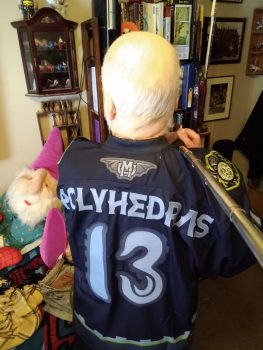 I wish I had come up with that pun in the title, but it comes from Steve Maggi himself. As did the jersey! Steve is an old friend and ex-colleague from our days at Game Designer’s Workshop. I very much appreciate this kind gift, Steve.

Now to decide how to display it here in my study!

Though my original Halloween plans got cancelled, a few Facebook friends joined me in an impromptu Lovecraftian adventure, and it was a hoot. Attending were my old high school buddy Jim Cotton, Barcelonan friend Abraham Limpo Martinez, and veteran role-player Jae Walker.

It was GM-less play using an online GameMaster’s Apprentice simulator as oracle. Game system was my Bookmark HP RPG, with upcoming Bookmark Cthulhu rules. Our video chat was via Facebook Messenger. I’ll mention dice only because Jae used a gorgeous set of Cthulhu-themed ones, Abraham used the Google dice app (as did I for our foes), and I used a CoinSides spinner. (They have a Cthulhu CoinSides Kickstarter underway!)

Our characters—Jim’s librarian, Abe’s ex-boxer, Jae’s archaeologist/explorer, and my petite young counselor—caught wind of plans for a cultic ceremony in a remote barn, snuck in, and while one of us toppled hay bales from the loft, two rousted cows, and the last leapt in to disrupt the ceremony.

That’s when, unexpectedly, a group of occult scientists showed up with arcane rifles blazing.

The ensuing melee of scientists, cultists, and cows was, well, “insane” comes to mind. Jim, Jae, and Abe rolled exceptionally well, their characters benefiting from the experience. I rolled so poorly that my counselor did pretty much nothing but suffer: smacked her head entering the barn, got her foot stepped on by a cow, got pinned between two others, and took a couple of punches.

Jim joked that his legendarily bad luck with dice had transferred to me. As fate would have it, the moment my battered young lady hid behind Jae’s adventurer and I quit rolling, Jim’s next roll was snake eyes, his worst possible result, on d8’s! Jim’s legendary bad dice rolls had come home.

Thanks for a Happy Halloween, gang!

That Twitter is now a private company, beholden to just one man, is unnerving.

What’s unforgivable is even reconsidering the Trump ban for disinformation and hate speech.

I’ve such a sense of nostalgia for Twitter’s early years, the Fail Whale, the programmed account that composed sonnets line by line from random posts, Florida Man, Shit My Dad Says, and much more.

That’s what nostalgia is for.

Where to next, gang?

“A sorrow shared is sorrow halved; joy shared is a joy doubled.”