Invasion of the Saucer People!

It’s the year 1999, and humankind has spread from Earth, with thriving colonies on Mercury, Venus, and Mars. The Terran Service Rockets (TSR) carry passengers and cargo among these planets. Those same ships are commissioned as the Guardian Defenders of Worlds (GDW) in case of external threat.

So far, the only dangers have been from rogue asteroids. Today, however, long-range sensors detect a fleet of alien ships approaching, capturing or destroying everything in their path. Can you and your fellow captains defend the inner planets from the Invasion of the Saucer People!

Battle to Save Sol’s Inner Planets!

Invasion of the Saucer People is a card game for 2-4 players working together to fend off a 1950’s-style alien invasion. Each turn, a wave of saucers attacks, and the players must band together to defend against them. To fail is to lose one of the inner planets—Mercury, Venus, Earth, or Mars—to the invaders. Lose them all, and humankind faces extinction.

Fortunately, your crew cards provide special abilities that can be used in a pinch to help hold off overwhelming attacks. Also, the game is self-leveling, so that 2 players face a lesser threat than 3 players or 4 do. 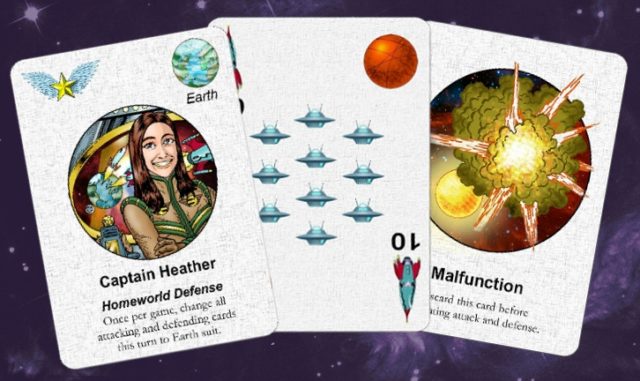 The Booster Pack adds new options to your defense of the inner planets. Included in this pack are full crews for both Luna and Ceres, in addition to Dr. Sato from the Pluto research station, a Captain from Hollywood, a young psychic Captain, a Robot Sidekick, and the ever-popular Space Monkey. Also included are color-coded rocket ships from each world, and new rules for rescuing planets the saucer people have captured! 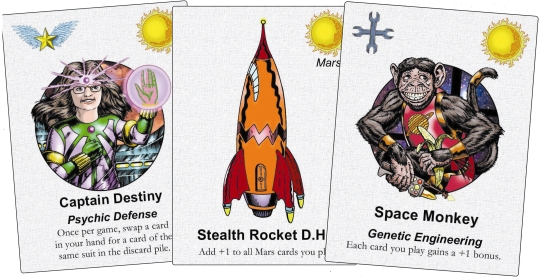 Illustration of Invasion of the Saucer People was made possible by these Kickstarter backers.

There are no reviews yet.

Only logged in customers who have purchased this product may leave a review.