I’ve been designing RPGs since 1986—from 2300 AD to the D13 RPG, from Dark Conspiracy to D6xD6 and in between. This page gives a brief overview of those various games.

Most of my design work in tabletop gaming has involved role-playing games. And most of that has been “work for hire.” These three bucket-list items are my own copyright, however.

Each is designed around a “One Roll to Rule Them All™” sensibility, to keep action quick and easy. And each has its own carefully crafted dice system hidden beneath a focus on your characters and their adventures.

I’d appreciate your giving them a look-see.

Designed for adventures throughout time and space, the D13 RPG allows game masters to truly terrorize, maim, and even kill player characters, without killing campaign continuity.

Besides the unique “d13” mechanic for skills, the game employs tarot cards for paranormal abilities, and a spirit board for combat tracking.

The D6xD6 RPG is a one-stat multi-genre game. Character creation takes about five minutes but is truly open-ended. The full rules are covered in roughly 20 pages but include a solid combat system.

It is a best-seller on DriveThruRPG and has been called the “haiku” of role-playing games.

The game was launched with settings based on the works of about two dozen novelists, with new settings being added regularly.

You’ll find the free core rules at d6xd6.com, along with several sample settings. 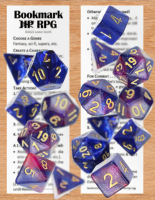 Another DriveThruRPG best-seller, this tiny set of rules has received rave reviews, with phrases like “game design as its most daring!” and “an epiphany of game design!” Its ridiculous title reflects the fact that it was spawned as a challenge to make a role-playing game without “Hit Points.” (Coincidentally, it handles character growth organically, without the typical XP of most RPGs.)

Like its larger siblings, this role-playing game is crafted with a careful eye toward simple, dependable dice mechanics designed to support character actions and adventure without limiting them.

It’s also my one-and-only fully polyhedral RPG design, an accident, and something of an obsession.

“I don’t know the key to success, but the key to failure is trying to please everyone.”